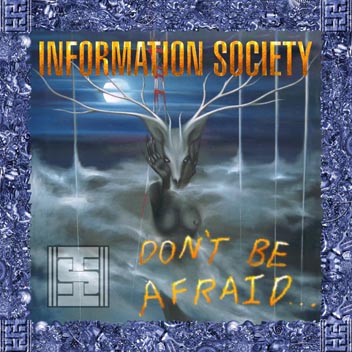 In 1991, I was slowly forming a new sort of sound for my music in my head, and in that sense, I've been working on this album since then. I recorded Closing In 1.0 in the summer of 1992, just before Peace & Love, Inc. came out. It was a difficult thing for me, because when I really thought about it, I realised that the kind of sound I wanted to make, the feelings I wanted to express, etc., were totally incompatible with what Information Society had been since 1986, as well as totally incompatible with the kind of music that Paul was doing, and with what Tommy Boy wanted us to do. I realized that I would have to start my own project to do the music I was beginning to compose.

"Don't Be Afraid" is mostly music about extremes of emotion and sensation. The most concise description I can give it is:

I began recording these versions of the songs with Fred Maher in Los Angeles, in July of 1996. He had to quit after 2 songs, and I then found Steve Seibold, with whom I did 6 more, in San Clemente, CA. I also used one of my home versions, which gave us 9 songs. I sequenced the thing at home in 03/97, using Sound Forge 4.0.

Here are some comments made by people who have heard some or all of 'Don't Be Afraid'. If you've heard the music feel free to add your own comments to the list.

Also, go HERE to indicate your favorite song on the album, and see which ones other people have chosen.

Also, HERE is a new review of Don't Be Afraid by Ric The Obscene 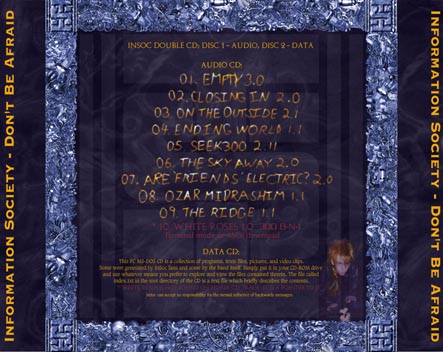 HERE is the text of the opening/closing speech on the album.

To buy a copy of "Don't Be Afraid", follow this link.

At my home studio, I built up the track live and recorded it onto hard disc. I have so far only ever used one sequencer: Voyetra's old Sequencer Plus Gold. (SPG) I was first exposed to it by Fred in 1987, when we were working on our first album. What I love about it is that it's a DOS program, and it runs in text mode, so it runs beautifully on a 286 PC. I have an old 286 box that serves as my sequencer and nothing else. Despite the fact that it runs in text mode, it is one of the BEST graphical representations of music I have ever seen. Best of all, it's NOT WINDOWS! YAY! Until recently, I had no reason to start using a GUI sequencer, but recent developments have convinced me that it is finally time to make the switch. Most notably, is the rise of direct-to-disc audio being merged with the sequencer. When I upgrade my studio next year, after touring, I will probably get Logic Audio.
For making new sounds, or sequencing albums or burning CD's or processing vocals or whatever, I use the incomparable Sound Forge 4.0, by Sonic Foundry. This is probably the all-round most satisfying piece of software I have ever acquired. (With the possible exception of Descent) For those of you who have version 3.0d, I can say that upgrading to 4.0b is worth it. They put all their effort into improving the quality of each effect, rather than trying to add as many new effects as possible. Many of the ver. 3 effects which were amusing but not usable are now perfectly professional.    Most of the sound in my songs comes out of Akai S-1000's. I know the 3000's are way cooler, but like I said, next year I'm upgrading my studio. The 1000's have served me well. I also get a lot of use out of my Roland MKS-80 analogue synth, E-Mu's Proteus, and a Roland D-110. My mixer is a Mackie, and I use a Casio VZ-1 for a controller and occasional string pad unit. For effects, I like my 2 Roland SRV-2000 reverb units, (which are fabulous classics) a BOSS (Roland) SE-50, and a Yamaha SPX-1000. (For which I paid an astounding $1800 back when I hadn't yet learned not to buy things the same week they came out.)
I use a Panasonic SV-3500 DAT machine as a mix-down recorder, and a Yamaha CDR-400 for burning CD's.
With sound design being as important to me as it is, I finally decided that shuffling through all my AKAI floppy discs was unreasonable, and I needed something better. I made a database for my sounds using MicroSoft Access, and the good people at Sonic Foundry were kind enough to write some new code for Sound Forge to allow it to throw sounds back and forth from the S-1000's to the computer via SCSI. I translated all my sounds to .wav's and now I store them all on my hard disc. Whenever I need a sound for a song, I just hit the "Send to Akai" button, and there it is. As of 08/11/97, I have 4405 sounds in my soundfile database. Some of these can be found on the
.Wav O' The Week (tm) site.

At Fred's studio, we sequenced with Logic and Logic Audio running on some kind of computer that wasn't a PC, and recorded everything onto DAT and ADAT. Some sound modules of his that we used: E-Mu's Proteus 2, 2 Roland MKS-50's, 2 Roland MKS-80's, a Roland R8-M, a Roland JV-880, a Roland JD-990 Fred has some mother-huge SoundTracs Solo MIDI mixer.
At Steve's, we sequenced with Cakewalk Pro on a PC, and recorded onto DAT and ADAT. Steve's gear that we used included a Roland JV-880, a Kurzweil K-2000 sampler, an Akai S-1100 sampler, a Roland JX-8P, and Steve's Schechter guitar-thing. (A guitar is a long piece of wood with metal strings attached. The strings are attached at both ends with adjustable fasteners that allow you to precisely set the tension. Then you pluck the strings with your fingers or a piece of plastic. A small magnetic head translates the vibrations of the string into an electrical signal which is fed to the output.) Steve's mixer is the Mackie 32x8.

"Don't Be Afraid" is a two CD-set. In addition to the audio CD, there is a
DATA CD
for use in your computer.
It's not any impressive "multi-media product". It's just a collection of InSoc-related sounds, pictures, video clips, programs, and texts. About half of them came from my archives, and the other half was sent in to me by InSoc afficianodos. Follow this link for a list of everything that's on the Data CD.
My favorite things include:
- The entire "Peace & Love Inc." video from InSoc's 3rd album...
- Code to program certain models of calculators to draw InSoc logos...
- A complete set of sounds for your installation of Windows95's system event sounds...


You get the idea.